We worked on the 17th annual edition of ZoukOut in Singapore, which was put on by the iconic Zouk Club. The Confluence was hired as Zouk continues their global expansion with the goal of creating a buzz outside of Asia in places like North America and Australia, while also handling all Asian press during the span of campaign. This included outlets in the worlds of music, travel, lifestyle, and food, in addition to setting up press trips from journalists in America to fly out to Singapore to cover the event.

South China Morning Post
“ZoukOut was launched in 2000 in Singapore, and this year’s edition promises to be the biggest yet, with bungee jumping, swings and a sky bridge and some of the world’s most renowned DJs and dance music acts.”

Your EDM
“Asia’s largest beachfront music festival and only dusk-to-dawn dance party is returning to Siloso Beach in Singapore for its 17th year. Top performers and fans alike rave about the destination fest, which seeks to provide an unmatchable experience with its fire lineup and overall immersive experience.”

Billboard
“The festival started as an outsider on the Asian scene, pushing dance music where crowds hadn’t yet come around. That was 17 years ago, and today, it stands stronger than ever.” 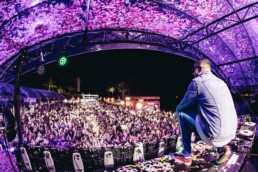